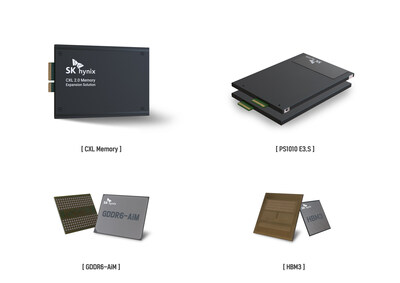 SEOUL, South Korea, Dec. 26, 2022 /PRNewswire/ — SK hynix Inc. (or “the company”, www.skhynix.com) announced today that it will showcase a number of its core and brand-new products at the CES 2023, the most influential tech event in the world taking place in Las Vegas from Jan. 5th through Jan. 8th.

The products, introduced under the theme of the “Green Digital Solution,” as part of the SK Group’s “Carbon-Free Future” campaign, are expected to attract Big Tech customers and experts given the significant improvement in performance and energy efficiency compared with the previous generation as well as the effect of lessening the impact on the environment.

Attention on energy-efficient memory chips has been on the rise as global tech companies pursue products that process data faster, while consuming less energy. SK hynix is confident that its products to be displayed at the CES 2023 will meet customers’ such needs with outstanding performance per watt* and performance.

*Performance per watt: an indicator of how much computation is performed per watt of power consumed.

The core product put forward at the show is PS1010 E3.S, an eSSD product composed of multiple 176-layer 4D NAND that supports the fifth generation of the PCIe* interface.

SK hynix said that the introduction of the PS1010, a combination of the company’s industry-leading technologies, was made timely as the server chip market continues to grow despite the current industry downturn.

The PS1010 product shows improvement both in reading and writing speed by 130% and 49%, respectively, compared with the previous generation. Its performance-per-watt is also improved by more than 75%, helping customers reduce costs to run servers and carbon emission.

“We’re proud to launch PS1010, an ultrahigh-performance product with self-developed controller and firmware, at the CES 2023, the world’s largest technology show,” Yun Jae Yeun, Head of NAND Product Planning, said. “This product will solve pain point of our server-chip customers, while paving the way for a stronger competitiveness in NAND business for us.”

Other products to be introduced at the show are HBM3*, a memory product with the world’s best specification for high performance computing, GDDR6-AiM that adopts the PIM* technology and CXL* memory capable of flexible expansion of memory capacity and performance.

*PIM (Processing In Memory): A next-generation technology that provides a solution for data congestion issues for AI and big data by adding computational functions to semiconductor memory

*CXL (Compute Express Link): A PCIe-based next-generation interconnect protocol on which high-performance computing systems are based

SK hynix will also present the immersion cooling* technology of SK enmove, which specializes in energy efficiency. The technology, designed to help cool down the heat of the servers generated during the operation, marks a successful case where SK hynix cooperated with other SK companies or external business partners to create new values in the semiconductor business.