Take a look: ‘Reading Rainbow’ is having a moment on TikTok 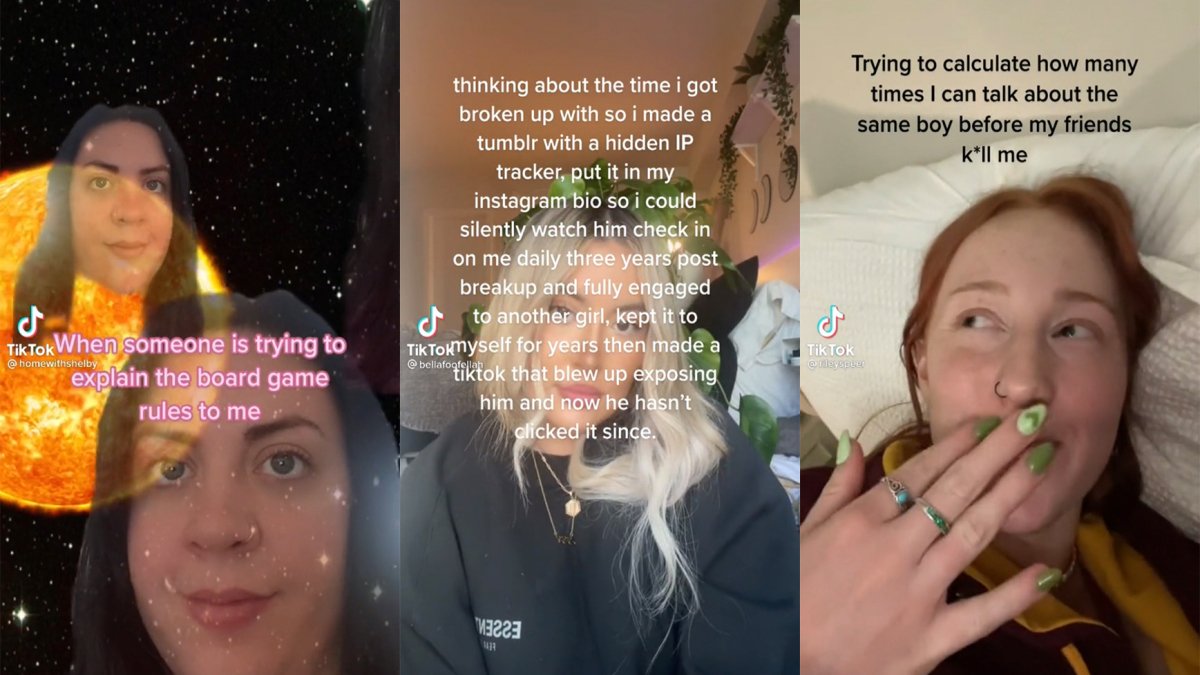 TikTok is in its math era this week. Two mathematical trends went viral, while Patsy Cline’s “Crazy” sparked some collective catharsis across our FYPs.

Butterfly in the sky

The concept is simple: TikTokkers write a confusing sentiment and use the Space filter, which duplicates your face and places them among the stars with a fiery planet and mathematical equation in the background. The filter is paired with the Reading Rainbow theme song for the full effect. The trend specifically uses the part of the song that goes, “Butterfly in the sky / I can go twice as high.” So far, the audio has been used in over 236,000 videos.

Some of my favorite examples of the trend include @homewithshelby’s video that reads, “when someone is trying to explain the rules of a board game to me,” and @itsbenrichards’s TikTok that says, “when the airport sign says Arrival or Departures, but I am Arriving for my Departure.” Some experiences are, in fact, universal. 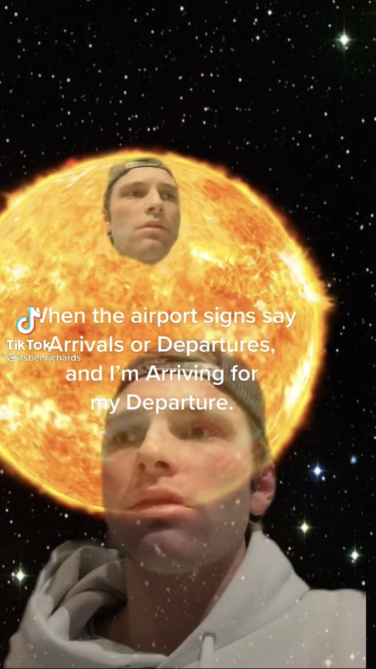 The average TikTok user might be too young to recognize the nostalgic source material of the trend, but Reading Rainbow was a popular educational PBS show that aired from 1983 to 2006. It made reading fun and interactive, and because of this it’s often used by teachers in the classroom.

This trend is essentially TikTok’s version of the “woman thinking about math” meme that first went viral back in 2016, but the combination of the Space filter and Reading Rainbow song add a uniquely homey twist to its internet source material.

The equations lurking in the background of the Reading Rainbow trend isn’t the only math that had its moment on TikTok this week. In a completely separate trend, users are pretending to calculate all sorts of things to the sound of items being scanned at the register of a store.

The sound was first posted by @itsandrewz on Feb. 2 to describe the panic you felt as a child when your mom left you alone at the register to “just grab one more thing.” The sound caught on, and even grocery store workers are using it to show how they interact with children waiting for their parents at the register.

The trend has now evolved to people using it to try to calculate things. From monetary things, like racking up a monthly lifestyle spend of rent, utilities, and weekend brunches, to more existential calculations, like why they let their feelings get hurt and how many times they can keep doing something annoying. The sound has been used in over 58,000 videos. Some funny examples include @saltybretheren’s video that reads, “me tryna figure out how i’m going to afford a full set, 3 new tattoos, an eighth, doordash and a road trip with the $143.67 in my bank account.” And @rileyspeer’s take that says, “Trying to calculate how many times I can talk about the same boy before my friends k*ll me.” 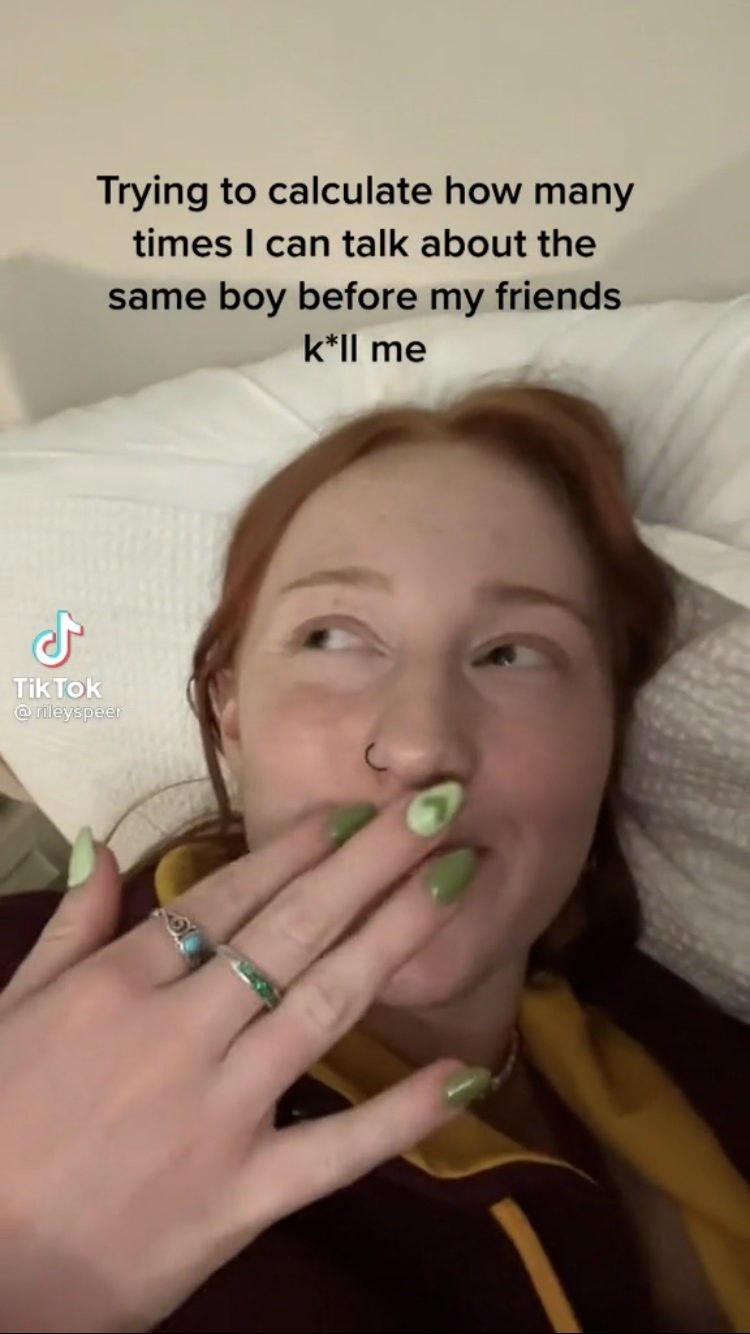 This trend is for all of us that live for the drama and love #messytiktok. TikTokkers are getting vulnerable and posting about their most irrational moments —  fittingly accompanied by the Patsy Cline classic “Crazy.” The sound has been used in just over 75,000 videos, and each story is juicier than the last.

Most of these TikToks deal with instances of betrayal, but others are just people acting generally unhinged. One of the most iconic examples of this trend is @bellafoofellah’s TikTok that reads, “thinking about the time i got broken up with so i made a tumblr with a hidden IP tracker, put it in my instagram bio so i could silently watch him check on me daily three years post breakup and fully engaged to another girl.” 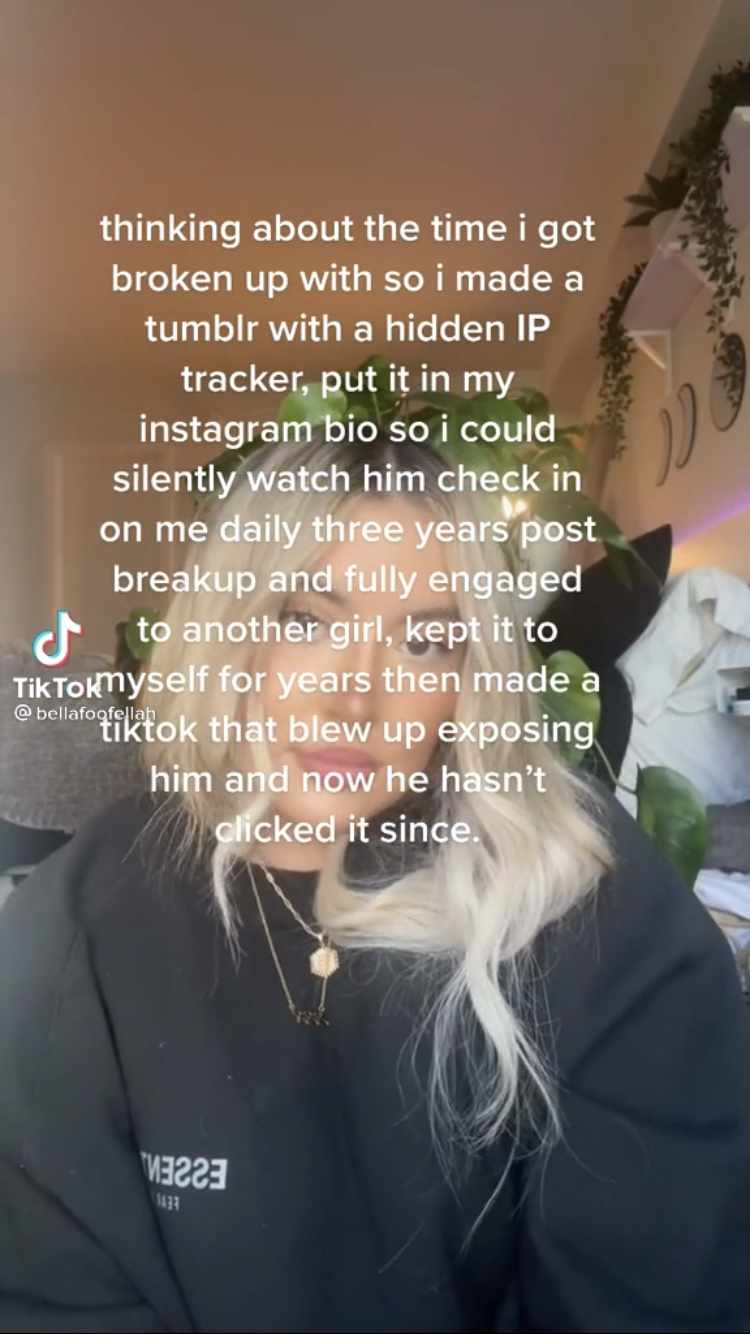 I am impressed!
Credit: TikTok / bellafootfellah

Perhaps you don’t want to share everything on the internet. So think twice before engaging with this trend.