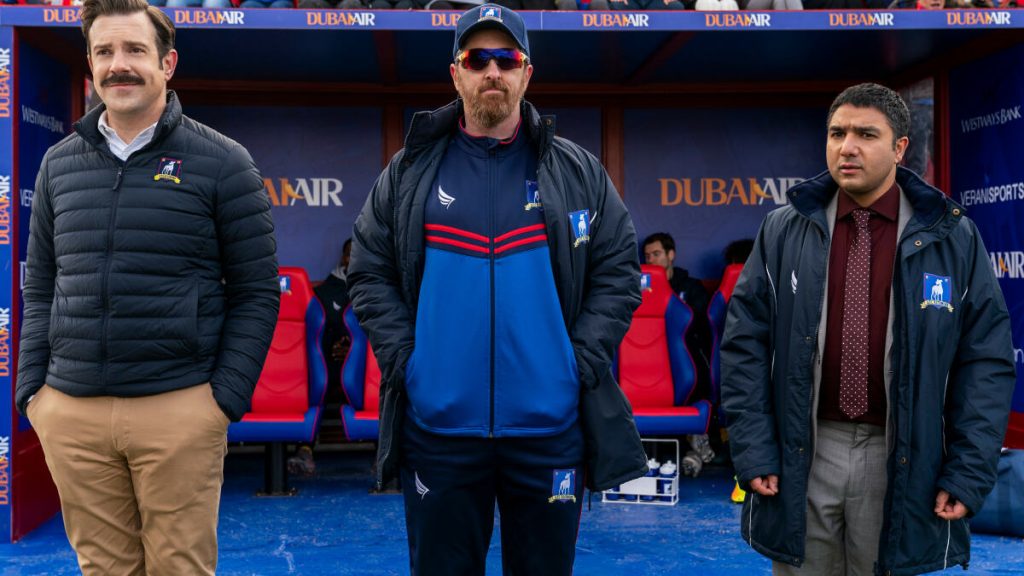 Season 2 of Ted Lasso has been building up to this moment.

Yes, I’m talking about the triumphant return of Roy Kent (Brett Goldstein) to AFC Richmond. But I’m also talking about the show’s use of “She’s a Rainbow” by The Rolling Stones, which plays as Roy makes his mad, rom-com inspired dash back to Richmond’s stadium.

While Ted Lasso has a solid soundtrack already, “She’s a Rainbow” stands out as the perfect needle drop. First of all, it’s a great song: a classic psychedelic rock number with a memorable piano line and sweetly romantic lyrics. But “She’s a Rainbow” isn’t simply imposed over a scene like other needle drops. It’s been built into Ted Lasso‘s narrative. And the way it’s been built into the story gives it another layer of meaning in the show’s universe.

In a blink-and-you’ll-miss-it moment from earlier in the season, Leslie Higgins (Jeremy Swift) picks up a call from his wife, Julie (Mary Roscoe). The ringtone? “She’s a Rainbow.” Could this have been a cheeky wink at the song’s use in iMac commercials, since Ted Lasso is on Apple TV+? Maybe. However, in Season 2, episode 5, aptly named “Rainbow,” we learn a little bit more about Higgins’ ringtone choice and why it’s so important to him.

As Higgins tells Rebecca Welton (Hannah Waddingham), “She’s a Rainbow” is the song that was playing when he met his wife. As he describes it, he was attempting to be a “brooding punk,” but when the song came on, he dropped that facade and tried playing upright air bass. He ended up spilling beer on himself, and Julie was the only person who didn’t laugh at him. Not only that, but she gave him a rag to help him clean himself up.

The story comes in response to Rebecca’s question about what Higgins’ “brand” was when he met his wife. After thinking about it, he tells her:

“I suppose the best brand is just being yourself.”

Rebecca and Higgins’ entire conversation places “She’s a Rainbow” in a very specific context within Ted Lasso. This is a song not just about love, but also about being yourself. Higgins didn’t connect with Julie by pretending to be something he wasn’t. He connected with her by just being who he is.

So what does this have to do with Roy Kent?

Up until now, Roy’s arc in Season 2 has been about figuring out where he belongs outside of his time at Richmond. He’s found a foothold as a football pundit for Sky Sports, but as delightful as it is for viewers to watch him swear with abandon on live television, it’s clearly not fulfilling for him.

What is fulfilling is coaching. We saw this earlier in the season when he coached his niece Phoebe’s (Elodie Blomfield) team. We see it in this episode as he reminds Isaac McAdoo (Kola Bokinni) to find the fun in football. It’s when Roy comes to this understanding and makes a run for Richmond that “She’s a Rainbow” kicks in.

Without the Higgins-Rebecca conversation, the needle drop would probably still have worked as an accompaniment to Roy’s journey. However, Higgins’ relationship to the song lends this moment even greater emotional depth. As “She’s a Rainbow” plays, Roy finally embraces what he loves and who he truly is: He’s a coach. He’s a Greyhound. He’s Richmond ’til he dies.

Ted Lasso also scores massive points for using “She’s a Rainbow” to its fullest extent. The song’s structure is full of stops and starts, with long instrumental breaks followed by rousing choruses. Roy’s journey is perfectly paced to fit into this stop-start structure: The scene moves with the song instead of fighting against it or ignoring it entirely.

Then there are the small details, like the rainbow streamers on the pedicab Roy rides, or how Julie (Higgins’ rainbow!) appears, dressed in blue, on the lyric “have you seen her dressed in blue.” The sequence even incorporates the discordant string section toward the end of “She’s a Rainbow” into the scene, focusing on Nate Shelley (Nick Mohammed), who looks extremely unhappy to see that Roy has joined the coaching team.

By having “She’s a Rainbow” mean something special to Higgins, Ted Lasso makes it mean something special to the audience. As a result, the emotional payoff of Roy’s big return is even greater than it would have been had there been no significance to the song choice. The whole episode is built around this moment and this song, and it completely nails it. As Roy Kent himself would say: “bloody f***ing brilliant.”