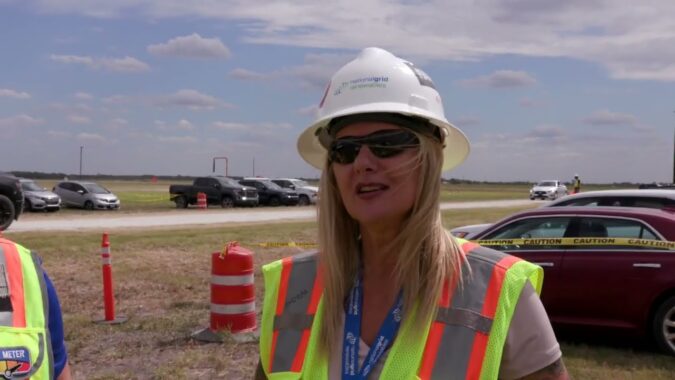 For a short film covering the event, click here.

Copperhead is projected to produce an estimated $25 million in direct economic impact throughout its first 25 years of operation, including the production of new tax revenue, onsite operations jobs, and the creation of a charitable fund estimated at $600,000. Using the United States Environmental Protection Agency’s (EPA) greenhouse gas equivalencies calculator, the project is estimated to offset carbon dioxide emissions by 250,000 metric tons annually.

“Together with customers like The Hershey Company, National Grid Renewables is helping to build a clean, fair and affordable energy future,” stated Blake Nixon, President for National Grid Renewables. “Projects like Copperhead promote sustainability and economic vitality at both global and local levels. Communities like those in the Falls County, Texas area can anticipate economic benefits for years to come as a result of welcoming renewable energy projects. With Copperhead, our commitment to the state of Texas and the ERCOT market remains strong, and we look forward to bringing this project to commercial operation to benefit local and statewide residents.”

“We have ambitious goals to reduce Scope 1 and Scope 2 emissions by more than 50 percent and Scope 3 emissions by 25 percent by 2030 as part of our science-based targets,” said Mark Kline, Director, Commodities and Specialty Procurement at The Hershey Company. “We’re making great progress toward achieving those goals thanks to projects like Copperhead and the great work of National Grid Renewables.”

As announced in its recently released ESG (Environmental, Social and Governance) Report, Hershey is on track to achieve its greenhouse gas emissions targets, having reported a 48 percent reduction in Scope 1 and 2 emissions against a 2018 baseline and a 18% reduction in Scope 3. The company’s investment in three solar farm projects – two of which are through National Grid Renewables – plays a large role in the progress thus far.

“As America’s solar company, we are proud that Copperhead will be powered by our responsibly produced, ultra-low carbon photovoltaic solar technology, designed and developed here in the United States,” said Darin Green, Senior Director, Business Development, First Solar. “Our thin film solar technology has the lowest carbon and water footprint of any commercially available PV technology today, while our integrated manufacturing process and tightly controlled supply chain allow for industry-leading transparency and traceability.”

“We are honored to work alongside National Grid Renewables and The Hershey Company on their second utility-scale solar plus energy storage project in the ERCOT market,” said John Zahurancik, SVP & President of Americas at Fluence. “This project is a great example of how solar plus storage deployments deliver impactful environmental benefits and reliable energy, along with local economic workforce development. Projects like this position us to influence global sustainability and provide tangible local community impact.”

“We are proud to be a part of the Copperhead Solar & Storage Project and ready to get to work in designing and building the system,” said Mike Gammill, Vice President of Solar Operations for TIC. “National Grid Renewables is making tremendous strides in advancing solar power generation, bringing a clean, reliable energy source to Falls County, Texas that will have a positive lasting impact on the community.”