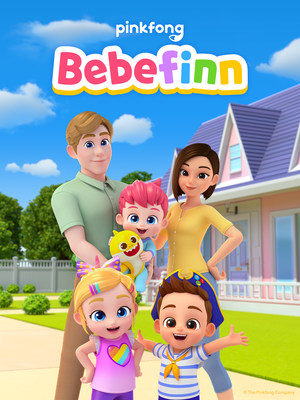 Click HERE for images and HERE for new episodes

Centering around Finn, a curious 20-month-old baby who loves Baby Shark, this brand-new animated series (50 episodes) depicts the dynamic daily lives of Finn and his family. Accompanied by 3-minute songs, each episode follows Finn and his two older siblings, Bora and Brody, and their parents as they explore fun-filled adventures in their house while learning something new.

With relatable stories and joyful tunes, this beautifully animated series became a breakout sensation, marking strong growth in its viewership. Within the three weeks of its launch, Bebefinn’s official YouTube channel achieved Silver Creator Award by YouTube to hit 100,000 subscribers, while its videos amassed 25 million cumulative views. In addition, its own Baby Shark video hit 12 million views in the same period.

“We are excited to finally reveal our brand-new 3D animated sing-along series Bebefinn,” said Bitna Kwon, Chief Strategy Officer at The Pinkfong Company. “Finn’s contagious smile and endless curiosity will motivate kids and families around the world to explore new aspects of daily life and make their learning fun. We can’t wait to see more people meet adorable Finn and his lovely family and look forward to further expanding the world of Bebefinn.”

That experience of growing Baby Shark into one of the most beloved IPs and creating-high quality content led The Pinkfong Company to turn family life into a 3D animated show that can genuinely be enjoyed by the whole family. In addition to bringing authentic stories about family, fun and easy lyrics and memorable melodies help kids to learn fundamental life skills such as healthy habits, social skills, and problem-solving abilities while watching Bebefinn.

New episodes of the Bebefinn series will be released on its official YouTube channel every Tuesday and Friday. Currently available in English, the series will roll out in Korean this May.

About The Pinkfong Company

The Pinkfong Company is a global entertainment company that delivers content and entertaining experiences around the world. Driven by award-winning brands and IPs, the company has created and distributed a range of content across genres and formats including original animated series, world live tours, interactive games, and more. Believing in the power of entertaining and engaging content, The Pinkfong Company is committed to connecting people around the world and bringing joy and inspiration to worldwide audiences of all ages.