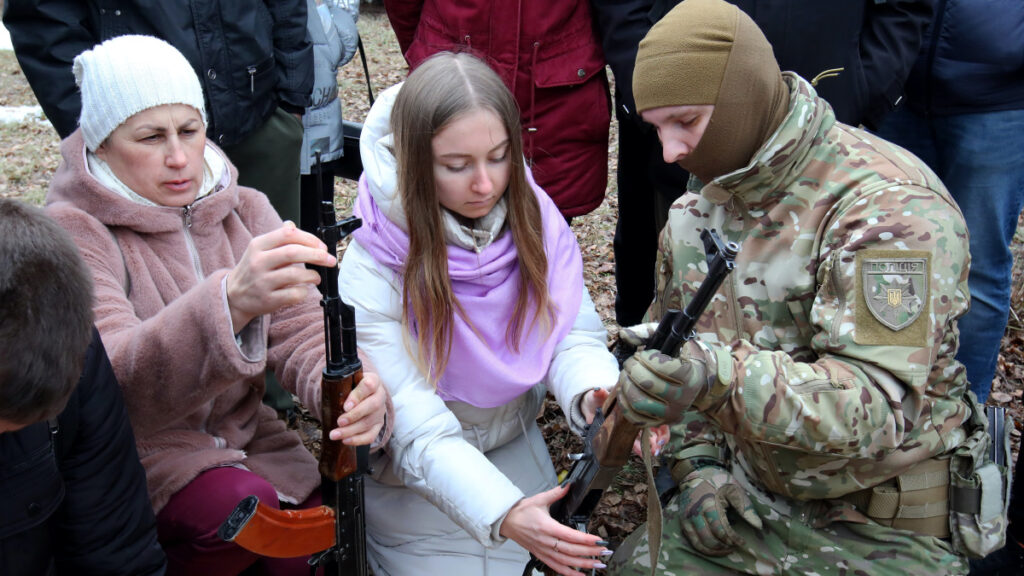 On the first day of their 2022 invasion of Ukraine, Russian forces sweeping north from the illegally-annexed Crimea peninsula took one of their first targets, the tiny port of Henichesk. They told residents it was a training exercise. Eventually one of those residents, an older woman in a white hat and puffy black jacket, walked up to a number of Russian soldiers carrying AK-74Ms. If she was armed, it was with sunflower seeds.

Almost anyone who was paying attention to social media during the first few days of the invasion saw what happened next. “Take these seeds and put them in your pockets, so at least sunflowers will grow when you all lie down here,” the woman says, in a video viewed more than 8.5 million times on the Twitter account of the tiny Ukrainian news service that first posted it. “You came to my land. Do you understand? You are occupiers. You are enemies…and from this moment, you are cursed.” Weakly warned not to escalate the situation, the woman shot back: “How can it be further escalated? You fucking came here uninvited!”

For those watching anxiously for signs of how Ukraine would respond to the Russian onslaught that Thursday, this was a fist-pumping moment. The woman’s name was (and remains) unknown, yet anyone who has ever witnessed a mother’s righteous fury knew her. The Russian soldier sounded like he barely believed his own training exercise excuse; he even found himself agreeing that yes, he was an occupier. The confrontation lasted just over a minute, yet it was worth a thousand hours of state propaganda.

As the video spread to TikTok and Facebook, thousands of social media users commented on the effectiveness of the woman’s curse and the sheer poetry of the sunflower threat. “Raw,” “brutal,” and “so fucking metal” were common descriptors. Nobody who saw it would soon forget that the sunflower, now a widely-favored emoji, is Ukraine’s national flower. Some users even posted screenshots of sunflower seed orders they were sending to their nearest Russian embassy.

The sunflower woman, as it turned out, was the advance guard in a torrent of videos showing ordinary Ukrainians taking extraordinarily brave actions. While naive commentators calling this the first social media conflict are wide of the mark — Syria and Afghanistan’s civil wars would like a word — there’s little doubt the immediacy of these videos helped galvanize a speedy global response that even includes the formerly neutral nation of Switzerland.

The virtual ground where Vladimir Putin’s army of trolls and bots fought for years to obfuscate almost every issue is now occupied by the people fighting his invasion force; a supposed “post-truth” environment has been swept away by images of thundering moral clarity.

Much credit, of course, goes to Ukrainian president Volodymyr Zelenskyy. It’s not just that the former comedian’s colorful biography seems tailor-made for modern attention spans (the world is now familiar with his Ukrainian Dancing With the Stars win and the fact that he provided the voice of Paddington in the Ukrainian dub of the beloved bear’s adventures). It’s that Zelenskyy has repeatedly posted videos of himself in Kyiv, surrounded by his government, flak-jacketed and refusing to leave.

The contrast with Putin, now seen to be isolating himself even in meetings with his top lieutenants, could not be more clear.

But Zelenskyy is far from alone in taking a stand. His statement to American diplomats offering to fly somewhere safer — “I need ammunition, not a ride” — was instantly memorable, but so were the words of the outgunned Ukrainian soldiers of Snake Island: “Russian warship, go fuck yourself.” (Contrary to early reports, Snake Island’s defenders survived the subsequent attack.)

Such stories are essential inspiration in wartime; morale is uplifted, bravery begets bravery. If the recent case of a Ukrainian sailor attempting to sink an oligarch’s super-yacht is anything to go by, more Russian ships will be told to go fuck themselves before this is over.

Below we’ve gathered the most memorable videos, and will add to the list as more arrive. As with the sunflower video, each features Ukrainians who have not been identified; as in that clip, we don’t actually need to know who these anonymous heroes are. What shines through is their humanity, their casual courage, their directness, and in many cases, their sense of humor.

In the same spirit as sunflower woman, this elderly Russian man who lives in Ukraine fearlessly berates his fellow countrymen in uniform. Various versions of the clip have been seen more than 3 million times.

In this 38-second clip, viewed more than 10 million times, a man in the southern port of Berdiansk clears a landmine from a road with his bare hands. More audaciously, he has a cigarette hanging from his mouth the whole time.

Your lift is here

One surreal aspect of the invasion is the fact that in normal times, Russians and Ukrainians see their countries as family. Indeed, many families have cross-border connections. That’s certainly the sense we get from this driver who stops to chat with the Russian soldiers whose armored vehicle has run out of diesel. The soldiers say they don’t know where they’re going. He offers them a lift back to Russia.

There are a lot of tractors in Ukraine; roughly one for every square kilometer. So it stands to reason that Ukrainian farmers would use their rides to tow those stalled Russian vehicles away from their intended destination. The second video purports to show the same farmer grabbing another personnel carrier with a different tractor.

One man standing in front of a tank; the image recalls Tiananmen Square in Beijing in 1989, when another anonymous hero tried to stop an entire column of them. What’s different in Ukraine: dozens of people are joining together to prevent armored vehicles moving down the road. As in this March 1 video, below, where a Russian soldier is seen firing ineffectively into the air. He fails to clear the crowd.

A final note of caution, courtesy of this viral thread: Remember that we’re talking about human beings, anonymous though they may be. The peril is real.

“Highlighting the resilience of Ukrainians is extremely important to boost morale,” writes Dr. Aditi Nerurkar, a Harvard physician, medical commentator and refugee health expert, but to save them from becoming “caricatures,” we must also “honor the depth of their tragedy and pain. We must vow as a global community to support their mental health now and once this horrific war is over.”