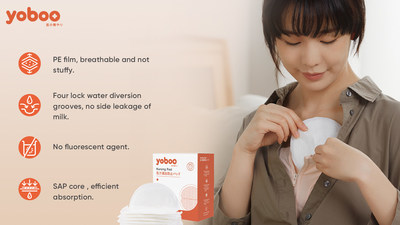 MANILA, Philippines, Jan. 21, 2022 /PRNewswire/ — At the beginning of the new year, medical feeding maternal and baby brand yoboo launched a new product – Nursing Pad. 2009 witnessed the establishment of the brand and its acquirement of the patent for the invention of Nursing Pad production molding. Besides, yoboo passed the microbial test of SGS in 2018, and the skin irritation test of SGS in 2019. And after many times of debugging and proofing, finally achieving intelligent mass production, after several years of efforts, this year officially entered the Southeast Asian e-commerce market.

Breastfeeding mothers often have to face the phenomenon of overflowing breastmilk, and the overflowing breastmilk will pollute their clothes, so many mothers will choose Nursing Pad to solve the problem. In order to obtain a product with lower cost and better sucking effect, yoboo researched and developed for many years, and obtained the patent for the invention of Nursing Pad production molding in 2009. yoboo covers the top of the moisture-absorbing material with a non-woven layer and the bottom with an impermeable membrane layer. They are sealed together with a heat press to form a sheet of nursing pads. After effective cutting, the nursing pads are again heat-pressed to create a shape that better fits the breast. Compared to traditional production methods, this method produces nursing pads that are easier to process, more hygienic, safer, and have a larger effective use area. From patent application to automated production, yoboo’s R&D team has exercised craftsmanship, double-checking and calibrating the production process.

Several data of microbial test are better than international standards

yoboo Nursing Pad is made of a non-woven surface, which is a super soft skin-friendly material. The absorber structure is a sanitary paper+wood pulp +SAP polymer core, that instantly absorbs and locks water. The bottom film material is PE pressure point film and non-woven breathable film, instantaneous absorption without reverse osmosis. Four water-locking diversion troughs, with no side leakage of breastmilk. All materials do not contain fluorescent agents. Breastmilk is rich in nutrients and is a breeding ground for bacteria, and as the weather gets warmer, it is more likely to breed bacteria and produce odors. If it is worn for a long time, it will easily cause bacterial growth. For the safety of mother and baby, it is recommended that the wearing time should not exceed 3 hours.

yoboo is dedicated to promoting advanced breastfeeding for working mothers in the new era. It has been developed by Japan Life Sciences Co., Ltd. in conjunction with the Asian Paediatric Association and the Japan Gynaecology Association, focusing on breastfeeding and scientific feeding in the field of how to promote healthy nutrition for babies.