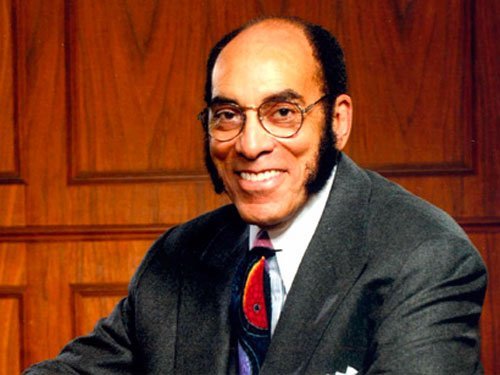 By Ralph E. Moore Jr.
Special to the AFRO

When Earl Graves Sr. left this world a year ago, it was a little bit wealthier for Black people than he’d found it. The wealth and income gaps between Whites and Blacks in America is stubbornly wide. The Urban Institute, a Washington, D.C. think tank, says the average net worth of African Americans is $19,049 while the average net worth of Whites is $130,472 and is only $12,329 for Hispanics. Earl Graves sought to close that gap and he had a level of success.

A proud ROTC graduate of Morgan State University in Baltimore, class of 1957, Graves was born in Brooklyn, New York to immigrant parents. After graduation he entered the U.S. Army where he rose to the rank of captain. Following his military service, he became an administrative assistant to Senator Robert F. Kennedy. But upon Kennedy’s assassination Graves then turned to business and never turned back.

Graves was creative and enterprising from an early age. Even while at Morgan, he struck a deal with a couple of florists and sold their flowers on campus for a percentage of the profits. Graves, an economics major in college, eventually became associated with wealth creation: teaching it, assisting others in attaining it and writing about it. He is best known as being the publisher of Black Enterprise magazine, that first hit newsstands and mailboxes in 1970. The readership has been listed as 3.7 million with a 2013 total circulation number of 534,752 as well. Either way, Black Enterprise since its inception is considered a prime source of information and advice for Black businesses, entrepreneurs and for content in career development, technical assistance and many things money related. Corporate executives, various professionals, budding and seasoned entrepreneurs and important decision makers read regularly.

With growth outward from the magazine, Black Enterprise publishes in print and online. Since 1973 it has listed the top 100 Black businesses in the nation (the B.E. 100s). For teenagers, starting in 2002, it has produced a supplement to the magazine entitled, Teenpreneur, to inspire, encourage and inform Black youth regarding business entrepreneurship. Black Enterprise also has two nationally syndicated television shows, Our World with Black Enterprise and Women of Power.

“Earl Graves has done more to increase Black wealth than any other person in the modern era,” said Dr. David K. Wilson, Morgan State University president. “He promoted Black entrepreneurs and gave them visibility. Some Black businesses would not have been successful without him.”

In 2015 the university honored Graves by naming the school in the Business Center for him, the Earl G. Graves School of Business and Management. Undergraduate through doctorate degrees are offered there. The Graves Honors Program is likewise named for him.

“I had a chance to get to know him. Graves came to campus frequently for homecomings, for sporting events and he came to my inauguration. He loved Morgan State. Whenever you’d see him on campus he would proudly be wearing his orange and blue. He was a proud Morgan grad.”

It was said by Graves that Morgan University was equal to any other educational institution in the country. With his confidence, Graves opened doors for Blacks to go through.  He was not bashful, it was said of him, in pushing corporate America to open its doors as he walked through them and urged others to follow him.  Dr. Wilson:  “For students on campus, Earl Graves motivated and inspired them with his spirit and tenacity whenever they would encounter him.”

Graves died on April 6, 2020. He had been married to his wife Barbara for 37 years, and together they had three sons, most notably Earl (Butch) Graves III, who is the current CEO of Black Enterprise.