Bushfire response: Do Australian NFPs have a trust problem? | PBA

Despite the influx of generosity in response to the bushfires, there is significant scepticism towards charities supporting the effort. Here, Richenda Vermeulen, founder and CEO of ntegrity, shares six essential elements not for profits need to build trust with the Australian public.

There’s no question that Australians dig deep in a crisis. Millions have been donated to the bushfires already – including the largest Facebook fundraiser ever of $50 million (at the time of writing).

But despite the influx of generosity, there is significant scepticism towards charities supporting the effort.

Source: Facebook. Many Australians are sceptical about donating cash.

According to the 2019 Edelman Trust Barometer, about half (56 per cent) of the Australian general public trusts the NGO sector. Edelman categorises this as “neutral” trust. And while NGOs rate above government and business for trust, they fall far behind other categories, like technology.

For the sector, there is room to grow.

In our work with Australian not for profits, we’ve seen the devastating impact this scepticism has on their bottom line – and ultimately, the people they support. 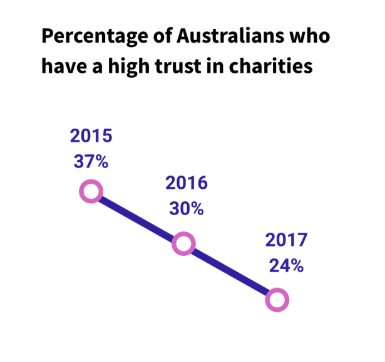 The hard truth is that this scepticism is rarely based in truth: its fuelled by incorrect perceptions and #fakenews.

If you look below the surface, you’ll actually discover that established NFPs are the most qualified to respond to a disaster. They have decades of experience in coordinating responses, with existing infrastructure and relationships in hard-to-reach communities. In the last six months alone, Australian Red Cross teams have responded to 30 emergencies, and the Salvos attend emergencies at least once every day of the year.

Crucially, organisations like these also have the capacity to help communities rebuild after the disaster has passed and media coverage has died down (along with our attention). But without trust, funds go elsewhere. And without funds, ravaged communities won’t be able to rebuild.

After nine years supporting NFPs to demonstrate and grow their impact, we’ve identified six essential elements to build trust with the Australian public.

Donors want assurance that their money is reaching people in need. This demand is heightened in a crisis, when we’re hungry for information, updates – and especially hope.

NFPs need to be specific in the projects they are tackling and show how donations are helping in practical ways.

In times of emergency, don’t be afraid to over-communicate.

Provide visual updates on responses to the crisis via social media, email and PR. 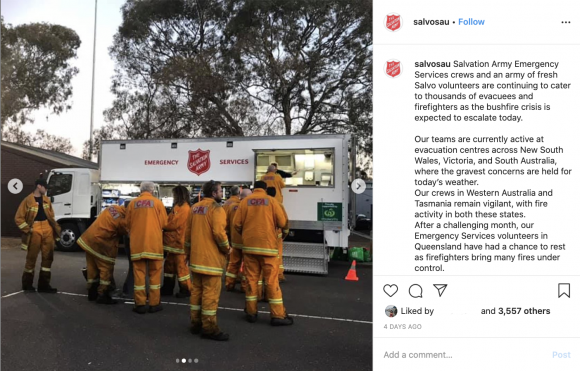 Use landing pages to detail active projects and division of funds. The more granular the better. 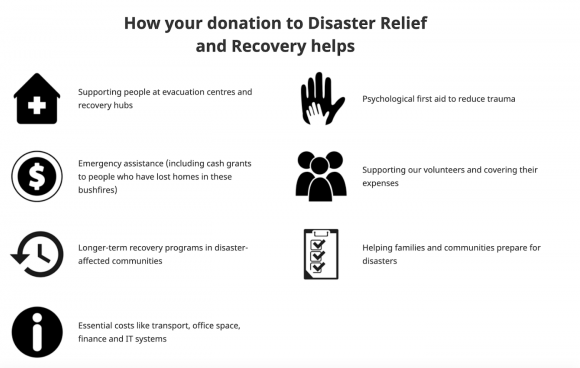 Your expertise is an asset. Differentiate yourself from “pop-up” crisis charities by highlighting the unique capability to deliver.

Building trust takes time, so as a proactive measure, provide regular updates on your efforts outside of crises to show your enduring commitment.

Don’t be afraid to share the nerdy stuff – interviews with your program staff and experts are especially appreciated in times of crisis. 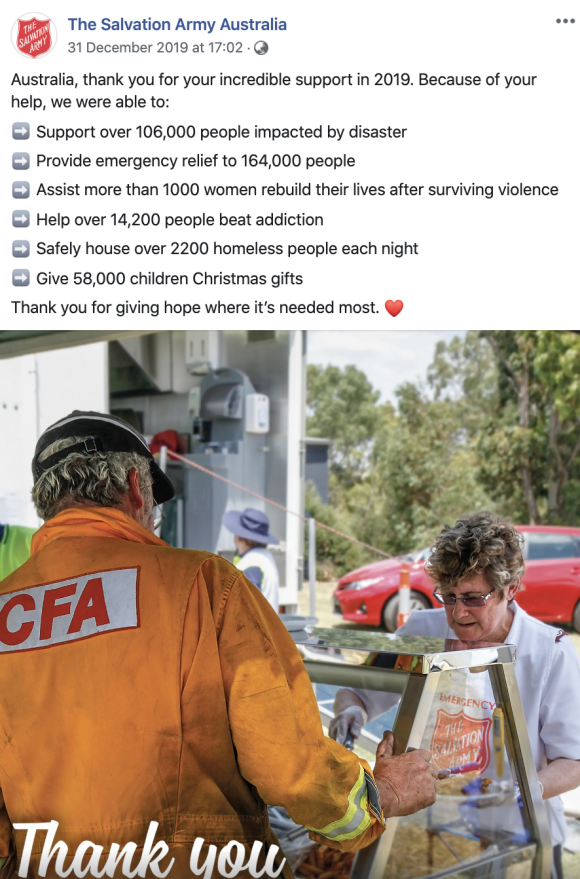 Donating is a social act. People are more likely to donate when influenced by others, particularly by those they know.

Looking at the success of Celeste Barber’s online fundraiser and other celebrities’ advocacy during the bushfires is a testament to the power of social influence in times of crisis. This simply mirrors the everyday conversations that people are having on who they’re giving to and why. 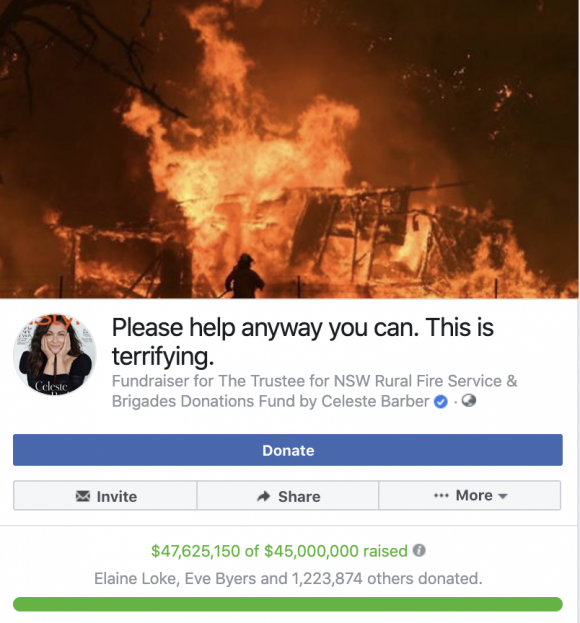 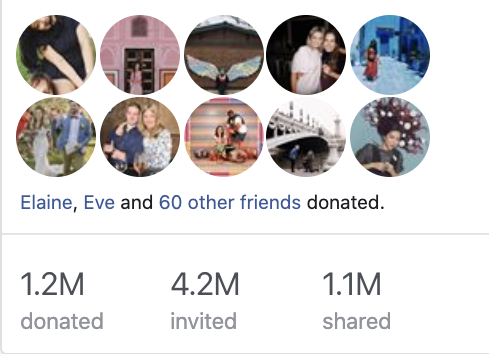 Ensure your donors are able to spread the word of their contribution via digital means and encourage their friends to join through sharing.

Don’t just think about social media: email is an effective way of getting straight to your donors. Instead of simply sending them a thank you and a receipt, capitalise on the momentum they feel just after donating and encourage them to share. Keep them updated with the work you are doing so they may be compelled to donate again.

Ultimately, giving your supporters permission to fundraise or advocate on your behalf can have a larger effect than trying to do everything in-house.

Disasters such as bushfires can have lasting effects on the mental and physical health of victims and the survival of wildlife, which are addressed by NFPs long after the initial trauma. WWF Australia, for example, has already initiated a long-term plan to restore koalas’ habitat following the NSW and Queensland fires.

Often, the initial influx of generosity during an emergency can peter out quickly with the decline in media coverage while the support of affected communities persists. As this graph points out – the required need in the emergency response doesn’t match the fundraising and media cycle. 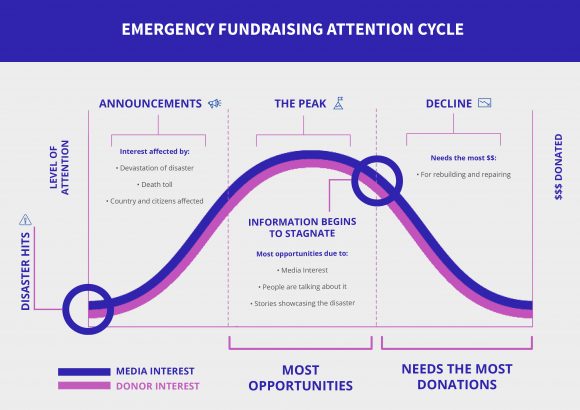 Here, education is important in extending the conversation.

Get ahead of this and utilise the current media cycle (particularly upcoming Australia Day) to ensure the public is aware of the long-term commitment that a disaster recovery requires.

Regular giving should become part of the conversation. This could even extend into developing a regular giving product specifically to meet this need.

Prospective donors still believe in the “overhead myth” – that keeping operational costs low leads to a more effective charitable organisation. Of course, this is far from true. We know that overheads are important for mobilising the cause and, like any organisation, are what enables them to exist at all.

It is important to lean into this conversation with prospective donors. Educate them on the importance of these costs when asked and be proactive in your transparency on the allocation of funds through FAQs and charts. 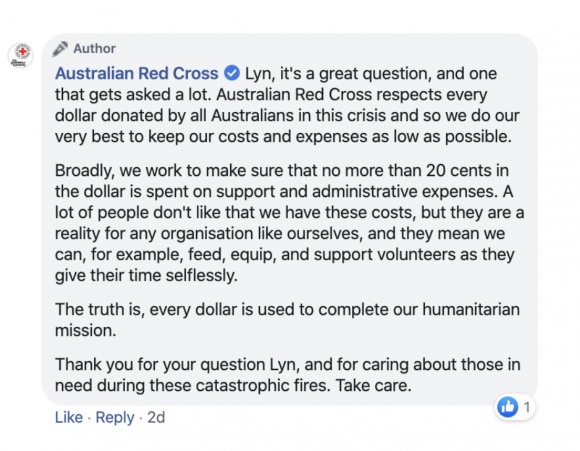 Showing how you’re making a difference and where funds are going is a key element of building trust. Don’t shy away from facts and charts that demonstrate the extent of your impact – and don’t hide them in your annual report either. Make impact statistics central to explaining your value proposition. 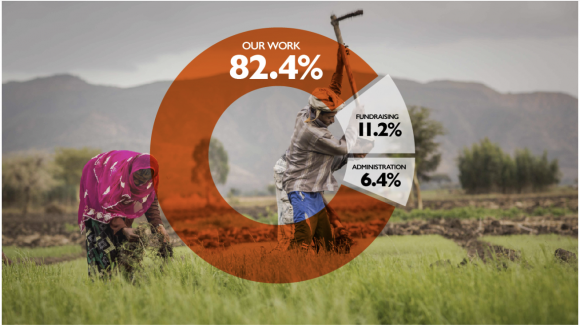 This conversation is not going to change overnight, but if we keep shying away we ultimately do Australians a disservice by not unpacking the issue.

Most charities use their CEO, key thought leaders and experts to speak to their impact online and in the media. But what many don’t consider is how activities like face-to-face and phone fundraising could be eroding trust.

The 2017 ACNC report showed that 45 per cent of respondents did not trust charities that paid salespeople to raise funds on their behalf.

When the wrong voices – who are rarely experts in the cause – are allowed to represent your cause on the street, do you think that increases trust in your brand or decreases it? Be smart about your representatives, especially at crucial moments like this. Don’t choose short-term dollars over restoring trust for the long term – ultimately it will mean losing the battle for the people you support.

In times of crisis, the communications and marketing departments at NFPs get intense. It can be easy to avoid the tough but important conversations, and resort to short-term tactics to get dollars through the door.

But when we do this, we short-change the Australian public and prevent our impact from growing.

Transparency and trust will define or destroy the Australian charity sector in the next decade. NFPs need to be leaning into the challenges of building trust by clearly communicating their impact and effectiveness, and changing the narrative around wasteful overheads. We need to be looking to the long term.

We extend our deepest sympathy to the communities and lives affected by the unprecedented bushfires ravaging our country. These bushfires have been a sharp reminder that human existence is fragile, and our lives are directly dependent on a safe and thriving environment.

Thank you to those doing the tough work of responding to the crisis, and those who tirelessly educate, advocate and protect our environment in the long-term. We know your work is far from finished.