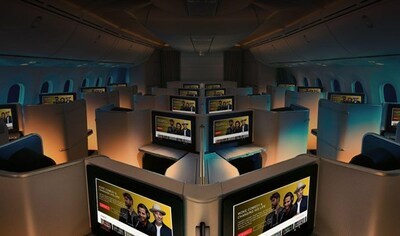 TORONTO, Jan. 5, 2023 /CNW/ – Stamina Group Inc. (“Stamina”) is proud to announce that their Gent’s Talk podcast series, presented by BULOVA Canada, driven by their premier men’s lifestyle magazine (with a focus on redefining masculinity), Gent’s Post, has expanded its reach to new heights. As of January 1st 2023, the Gent’s Talk podcast series, co-hosted by Samir Mourani and Matthew Chapman, is now available on Air Canada’s in-flight entertainment system and everywhere podcasts are streamed – with new episodes released every Monday. It is distributed in both audio format on Anchor, Google Podcasts, Apple Podcasts, Amazon Music, Good Pods, and iHeartRadio, as well as in video on Spotify, YouTube and onboard Air Canada flights.

Season 1 of the Gent’s Talk podcast series boasts an impressive roster of notable celebrity guests including comedian, Russel Peters; international fashion model and actor, Nick Bateman; Team Canada soccer player who represented Canada at the FIFA games in Qatar, Jonathan Osorio; and Dragon’s Den star and serial entrepreneur, Wes Hall. A total of 15-episodes have been loaded onto over 400-aircrafts of the airline’s fleet, servicing domestic and international flights in both audio and video formats to over 52-million passengers annually.

“It’s been an amazing journey to host such prominent guests, who haven’t been afraid to openly share their stories,” says host/producer of Gent’s Talk, Samir Mourani. “They’re making a difference and we’ve already seen an overwhelmingly positive response from our audience.”

The concept behind the Gent’s Post platform as a whole was the brainchild of creative director and founder of STAMINA Group Inc., and executive producer of Gent’s Talk podcast, Steven Branco, who has been a long-standing advocate for mental health equity.

“People crave open, unfiltered, vulnerable conversations that are thought-provoking and inspiring,” says Branco. “The content resonates deeply and highlights the similarities in many of our experiences. Our goal is to break the stigmas around mental health and put an end to toxic masculinity.”

In less than 6-months, the podcast amassed over 3.6-million views, across all platforms, and has had several videos go viral on both Instagram and TikTok. The producers are confident that the podcast will continue to grow exponentially. And with presenting sponsor BULOVA recently signing on for a second season (which will be on aircrafts later this quarter), it appears the sky’s the limit.

Stamina continues to increase accessibility with plans to make the podcast available in more languages including (but not limited to) French, Spanish, Mandarin, and German, later this year.

A weekly podcast series, powered by Gent’s Post, presented by BULOVA Canada, co-hosted by Samir Mourani and Matthew Chapman. Joined regularly by both leading and rising Gents and experts alike, from diverse backgrounds and industries, for thought provoking roundtable discussions. Each podcast episode tackles different aspects of navigating today’s society as a modern man; what that means for us, our loved ones, our dreams and ambitions. No topic is off-limits! New episodes released every Monday everywhere podcasts are streamed and YouTube, and new seasons made available on Air Canada every quarter.

Gent’s Post, owned and operated by STAMINA Group Inc., launched in late 2021 with a goal to redefine masculinity for the modern “Gent,” and put an end to toxic masculinity. Encouraging limitless expression and empowerment for masculine identifying people through education. Influencing all aspects of their lives, from what Gents want, crave, rock, need and wander for.