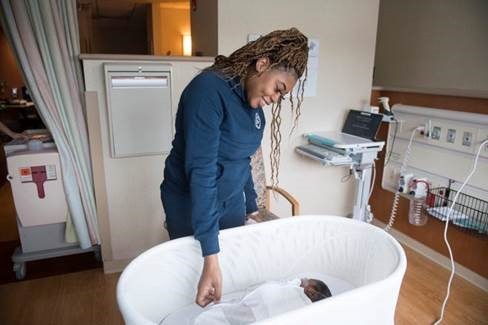 By Daryl Moore
Special to the AFRO

A study found that African Americans have 2.3 times the infant mortality rate as non-Hispanic whites. One of the leading causes for this troubling disparity is Sudden Infant Death Syndrome (SIDS). Unfortunately, Blacks have over twice the SIDS mortality rate as non-Hispanic whites. According to the Baltimore City Health Department, one of the leading causes is unsafe sleep.

The good news is there are tools out there to help improve African American infant mortality rates.

Thanks to safe sleep practices, creating a safe environment can reduce the risk of SIDS and other sleep-related deaths of infants. After creating awareness about safe sleep practices, we have seen a decline in sleep-related deaths of infants since 1990. Some of these practices reduce the chances of accidental suffocation, and some help to prevent infections. Creating a safe environment helps babies wake up more easily. Unsafe sleeping practices were very common in the past. According to the PRAMS report of 2015, 38% of the black Americans were not placing their children on their back, 77% were sharing beds, and 41% provided soft cushioning to their babies while sleeping.  If they start doing the right practices, we can surely see a huge decline in African American infants’ death rates.

An important step toward that goal could be to change infant sleep practices in the community.  One study reported that even though placing an infant to sleep on his back has decreased the death rate from Sudden Unexpected Infant Death (SUID) and SIDS, many Black families continue to advocate bed sharing, prone sleeping, and inappropriate bedding/sleep surfaces, predisposing an infant to a significantly higher risk for SUID/SIDS.  This same study concluded that Black mothers tend to believe that SUIDS/SIDS is a random occurrence and is not preventable, so they see a little reason to make their infant sleep in a cold, hard crib, when they could sleep in a warm, comfortable bed with them.

In 1994, the “Safe to Sleep” campaign, formerly known as the “Back to Sleep” Campaign was initiated by a collaboration between the National Institute of Child Health and Development, the American Academy of Pediatrics (AAP), the Maternal and Child Health Bureau of the Health Resources and Services Administration and SIDS groups. The focus of the campaign was to encourage parents to put their babies to sleep on their backs in order to reduce the risk of SIDS. Since then, overall rates of SUID – which include sudden infant death syndrome as well as accidental suffocation or strangulation in bed and other unexplained deaths – declined sharply.

Right here in Baltimore, B’more for Healthy Babies (BHB) works to reduce infant mortality in Baltimore City through programs emphasizing policy change, service improvements, community mobilization, and behavior change. It has helped reduce the infant mortality rate in Baltimore City to its lowest point ever: 9.7 deaths per 1,000 live births (2012). Infant mortality has decreased by 28% since the launch of the initiative, from 13.5 in 2009 to 9.7 in 2012; the disparity between white and black infant deaths decreased by almost 40% during same time period. Furthermore, BHB claims to work to improve an often-fragmented health care system to reach all of Baltimore’s families with “quality maternal and infant health services and support.”

One of the basic recommendations from the AAP Task Force on SIDS is to always place the baby on his or her back to sleep. The back sleep position is the safest position for all babies until they are one year old.

Another recommendation of the AAP is to never place baby to sleep on soft surfaces, such as on a couch, sofa, waterbed, pillow, quilt, sheepskin, or blanket. These surfaces can be very dangerous for babies. Do not use a car seat, stroller, swing, infant carrier, infant sling or similar products as baby’s regular sleep area. The AAP says following these recommendations reduce the risk of SIDS and death or injury from suffocation, entrapment, and strangulation.

Baltimore’s own Sinai Hospital uses guidelines from the American Academy of Pediatrics for safely putting your child to sleep. They include:

B – Back – Babies breathe best on their backs

In addition to these guidelines, Thanks to a generous donation from Dr. Harvey Karp, Sinai Hospital also has the SNOO Smart Sleeper at its disposal. “Our teams at Sinai Hospital of Baltimore use their skills and compassion to make sure our littlest patients thrive and grow. So, we are grateful for the generous gift of two SNOO Smart Sleeper Bassinets to help us with that goal,” says Melissa Wisniewski, NICU Nurse Manager at Sinai. “The SNOO is now one of the tools we utilize to comfort our babies because the basinet senses when an infant is crying and fussing and uses an automated gentle motion and soothing sounds to lull them to sleep.”

“Every year, 3,600 US babies die in their sleep,” Karp said. “Half of these deaths occur when the baby rolls to the stomach. SNOO is the only baby bed that secures babies on the back for the first 6 months. In the hospital, it also keeps babies sleeping better, tired moms are not tempted to accidentally fall asleep with the baby in their adult bed. That’s important because bed sharing in the hospital can lead to injuries, from the baby falling out of the bed, and even deaths, from tired mothers accidentally rolling onto their baby causing suffocation.”

It is important that the African-American community remain diligent in taking all the necessary precautions since they are particularly at risk. Safe sleep practices are an important step toward that goal.