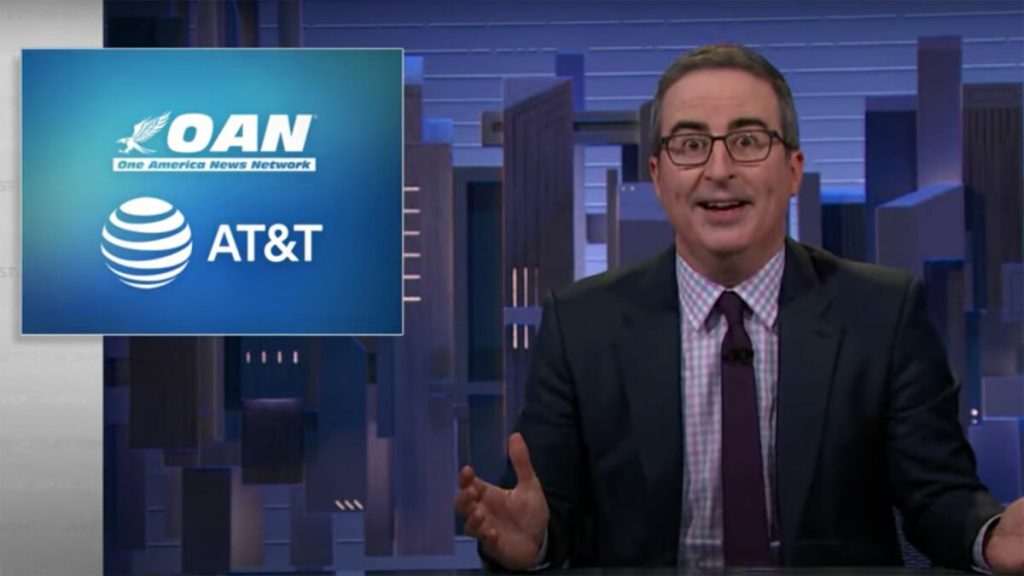 What started as a light-hearted ongoing gag about their internet and phone signal recently took a more serious turn over the company’s stance on the Texas abortion ban — and then during Sunday night’s episode of Last Week Tonight, things escalated once again.

“Yep. Turns out AT&T has been up to some shit,” said Oliver, after playing a CNN news clip discussing a recent Reuters investigation into how One America News (OAN), a right-wing channel that Oliver has previously done a whole segment on, has allegedly flourished with support from — you guessed it — AT&T.

“You’re a terrible company. You do bad things and you make the world worse.”

“Now I have to tell you AT&T says that no senior executive suggested to [Robert] Herring [OAN’s founder] that he create another conservative network, with the carve out of ‘senior’ there being pretty striking,” said Oliver. “They’ve also said they’ve never had a financial interest in OAN’s success and do not fund the network, neither of which is 100 percent the issue here. They also claim that the only reason OAN was on Direct TV [an AT&T broadcaster] was that the network had sued them, and OK? I guess the largest telecom company in the world got robbed in a lawsuit by a ragtag band of fascists, it happens!”

Oliver went on to explain that an OAN accountant reportedly said under oath that AT&T provided 90 percent of income for Herring Networks (the media company that owns OAN), and that when asked about OAN’s content, AT&T stated the importance of “editorial independence” — something Oliver was clearly pleased to hear.

“If I may, I’d like to use some of that generous editorial independence to offer some constructive feedback to AT&T,” he said. “Take this recent campaign, ‘More for your thing, that’s our thing,’ which is respectfully, complete gibberish. It sounds like Yoda pitching a penis enlargement device. It’s so nonsensical I have to assume something was lost in communication, which actually would be a much more appropriate slogan for the company.”

Next, after pitching a couple of other slogan ideas, Oliver addressed AT&T directly. And he didn’t hold back.

“You’re a terrible company,” the host said. “You do bad things and you make the world worse. Please don’t bother keeping in touch once the merger’s complete, although that really should not be a problem for you, you’re AT&T. It’s not like your messages will go through anyway.”

You can watch Oliver’s address in the latest episode of Last Week Tonight, streaming on HBO Max.