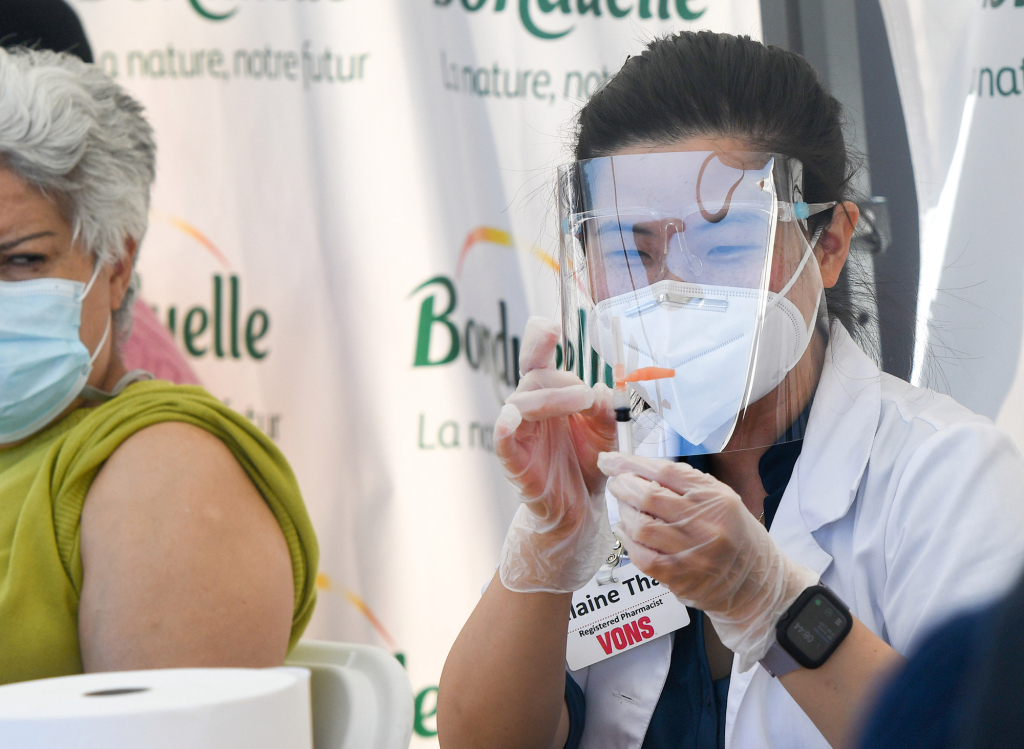 Residents aged 16 and over will be able to get vaccinated against COVID-19 as early as Tuesday, April 13, at city-run sites in Los Angeles, officials said on Sunday, May 11.

“Opening vaccine eligibility to all Angelenos who are 16 and older is a major milestone in our efforts to get more shots into more arms and defeat COVID-19 once and for all,” Mayor Eric Garcetti said. “We urge patience as we continue to ramp up our operations, obtain more doses, and enter this new phase of our campaign to end the pandemic. But our commitment remains clear: as soon as vaccines are available, we are ready to administer them swiftly and safely.”

Appointments for the vaccines can be made at https://carbonhealth.com/covid-19-vaccines/los-angeles, and are open to any Los Angeles County resident.

The city is expected to receive nearly 60,000 doses of the Moderna vaccine and 56,000 doses of the Pfizer vaccine this week, and still has about 15,000 doses of the Johnson and Johnson vaccine in supply. The city vaccination sites will be able to administer more than 130,000 doses to Angelenos —including approximately 60,000 first dose appointments and 70,000 second doses — across its nine permanent sites and its Mobile Outreach for Vaccine Equity program, officials said.

The city is also taking over operations from state officials at the Cal State Los Angeles vaccine center. The Los Angeles Fire Department will lead the team at Cal State LA, supported by staff from Community Organized Relief Effort, as well as those contracted locally for the site through FEMA.

All sites will be open Tuesday through Saturday between 8 a.m. and 4 p.m. Dodger Stadium, which will only be offering appointments until 1 p.m. this week from Tuesday through Thursday to accommodate home games, although the site will remain open until 4 p.m.

Also Sunday, Los Angeles County reported 546 new cases of COVID-19 and 10 additional deaths, although the lower number of deaths may reflect reporting delays over the weekend.

The number of coronavirus patients in county hospitals dropped from 492 Saturday to 470 Sunday according to state figures, which are generally a day ahead of numbers provided by the county. That’s the lowest figure since March, 2020. The number of COVID patients in intensive care dropped from 125 to 116.

Sunday’s numbers brought the county’s totals to 1,225,796 cases and 23,477 fatalities since the pandemic began, according to the Los Angeles County Department of Public Health.

On Saturday, the department reported an additional 11 cases of multisystem inflammatory syndrome in children.

MIS-C is a serious inflammatory condition associated with COVID-19 that affects children under 21 years old. Symptoms include fever that does not go away and inflamed body parts, including the heart, lungs, kidneys, brain, skin, eyes, or gastrointestinal organs. Parents who believe their child is displaying MIS-C symptoms are urged to contact their primary care doctor or an urgent care provider.

“While we are making tremendous progress with the spread of COVID-19 in our county there is also still great sadness as well,” Public Health Director Barbara Ferrer said Saturday. “… April is a critical month in our COVID-19 recovery journey. Over the last few weeks, businesses and public spaces have reopened, and many more people have been out and around others. With increased contact among non-household members, there are many more opportunities for transmission of COVID-19, particularly if public health directives are not followed. As we’re seeing in many other states, if we can’t find it in us to follow safety precautions, including wearing face coverings and distancing when around others, we jeopardize our ability to move forward on the recovery journey.”

Los Angeles County will see a dip in its supply of doses this week due to what is expected to be a temporary shortfall in availability of the one-dose Johnson & Johnson shots.

But while the decline in the county-controlled supply is concerning —and poorly timed — there are still expected to be about a half-million available doses in the county, thanks to other non-county or city providers who receive direct allocations from the state and federal governments.

“Taken together, we estimate that well over 500,000 doses of vaccine will be allocated to vaccination sites across the county,” said Dr. Paul Simon, chief science officer for the county health department.

The county’s allocation of vaccine for next week is expected to total 323,470, Simon said. That’s a roughly 74,000-dose drop from last week, with the reduction due to a major drop in availability of the Johnson & Johnson single-dose vaccine. The county received about 97,000 doses of that vaccine last week, but will only receive about 20,000 this week.

Simon said the county’s allocations of Pfizer and Moderna vaccines will both increase, but not enough to make up for the Johnson & Johnson dropoff. He said he remains confident that the Johnson & Johnson supply will rebound in coming weeks, and overall, the county is on track to get much of the adult population vaccinated by early summer.

“At the pace we’re going, we will be able to get where we want to be by late June, as long as people continue to present for a vaccination,” Simon said. “… But over a several week period as things open up — and we’ve seen this in the past as other groups became newly eligible — there is that rush over a period of a week or two, and there’s just no getting around that.

“So I think we will be urging the public to be patient, but we are confident we will be able to serve everybody’s needs over the coming weeks,” he said.

Simon also noted that when everyone 16 and up becomes eligible, it creates a further challenge for people who have less access to online appointment sites, as a wider portion of the population with greater computer access crowds them out.

“We are quite concerned with this opening up of eligibility … that those with less resources, less ability to navigate these online appointment systems or faced with waits on our call line will have more difficulty getting appointments,” he said. “And that could have the unfortunate consequence of worsening these disparities. … And so we are going to be working really, really hard to make sure we work with the community organizations that are serving these communities to make it at little bit easier for them to get appointments.”

As of April 4, a total of 4,715,894 doses of vaccine have been administered in the county, including 1,652,149 second doses. Simon noted that number represented an increase of 702,000 over the previous nine days, meaning an average of about 78,000 doses administered daily during that span.