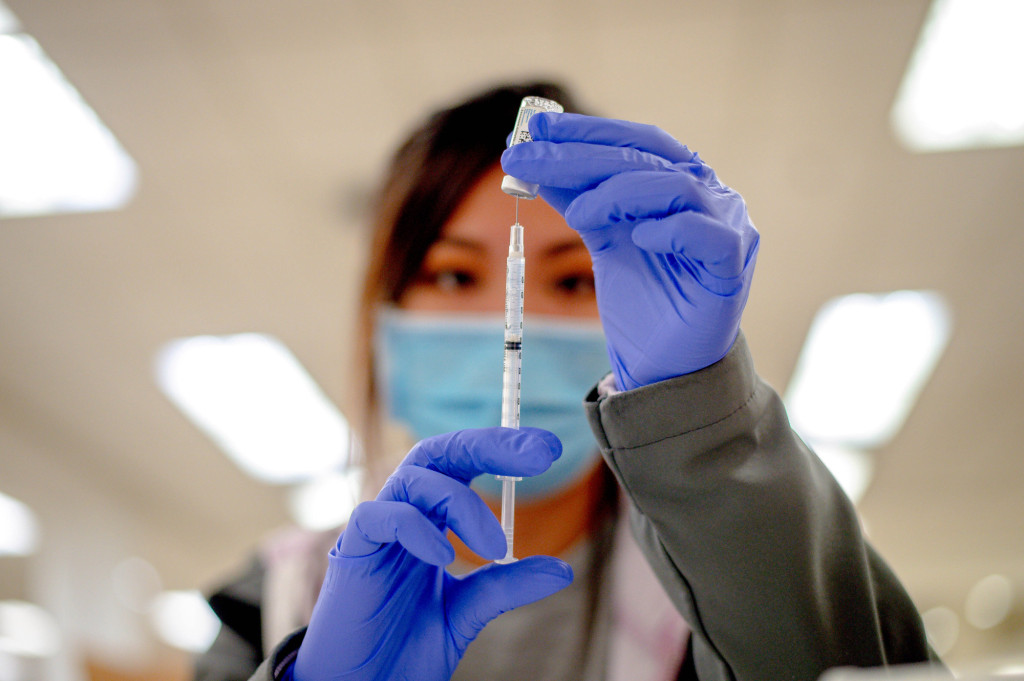 Why did six younger women — out of 6.8 million Americans who have received Johnson & Johnson’s COVID-19 vaccine — suffer an extremely rare type of blood clot?

Research from Europe suggests it might involve a confounding immune system response resulting in unusual blood clots paired with low platelets — the blood cells that, when working correctly, stop bleeding by clumping together and forming plugs. Other scientists, however, suggested the clots might signify nothing related to the vaccine at all, but rather the frequency of a rare disorder in the larger population — here, 1 in some 1.1 million.

Federal officials were drilling down on the details Tuesday, April 13, as they recommended that J&J’s one-and-done shot be removed from America’s vaccination rotation until more is understood. Though it wasn’t required, California and its counties joined much of the nation in pausing use of the J&J vaccine out of an abundance of caution, offering the two-shot Pfizer and Moderna regimens to those who had appointments for the J&J vaccine instead.

This was expected to be little more than a hiccup in California’s vaccination campaign, as Johnson & Johnson comprised just 4% of the state’s vaccine supply, according to Gov. Gavin Newsom. In Los Angeles, Orange, Riverside and San Bernardino counties, J&J is responsible for some 6% to 7% of those vaccinated so far, officials said.

All told, some 875,000 Californians have received the J&J shot. If severe headache, abdominal pain, leg pain or shortness of breath develop within three weeks of vaccination, patients should contact their doctors or seek medical care, the California Department of Public Health said.

While vaccine skeptics seized on the pause to bolster arguments that immunizations are dangerous, scientists worried that it would feed vaccine hesitancy, even if the clots turn out to have nothing to do with the vaccine at all.

“Is this a sequence of events that may be tied to the vaccines, or is this something that happens normally in the population?” asked Dr. David D. Lo, distinguished professor of biomedical sciences at UCR and director of the Center for Health Disparities Research.

“My worry is that this is it going to make people more hesitant about getting vaccinated. What if it turns out to be a random events cluster? If they weren’t random, they wouldn’t cluster — but human cognition doesn’t like to think of things that way.”

Andrew Noymer, an epidemiologist and population health scientist at UC Irvine, has that concern as well.

“The vaccines are absolutely the best thing going right now,” he said. “These incidents are quite rare — we’re talking about one in a million — and your chance of getting COVID and dying from it is worse than that. This pause is actually a sign of how conservative and careful the FDA and its European equivalent are in terms of tolerance for adverse effects, because even one in a million is enough to pause.

“But I am a little worried that this vaccine will never recover in the public’s mind, even if they review the evidence say it can resume. The vaccines get a stink on them, and the average person doesn’t delve into the details of how one is different from another.”

The J&J vaccine uses the same kind of technology as does Europe’s AstraZeneca vaccine — which has also been tied to rare but serious blood clots.

While Moderna and Pfizer use a fatty package, encasing a single strand of delicate messenger RNA, to deliver instructions to human cells on how to manufacture the virus’ spike protein, Johnson & Johnson and AstraZeneca use adenoviruses — of the sort that cause runny noses and common colds — to deliver more rugged, double-stranded pieces of DNA to do the same thing.

In all four vaccines, the immune system learns to recognize the coronavirus spike and attack if and when it encounters the real thing.

J&J’s delivery vehicle is an adenovirus that’s been modified so it can enter cells but can’t reproduce or cause illness. AstraZeneca’s uses a modified adenovirus from chimpanzees that the human immune system won’t recognize. Both are “non-replicating viral vector vaccines” and some wonder if the common adenovirus platform might play a role in the clotting issues.

“They’re both adenovirus vaccines. How much is that a factor in what’s going on?” said Dr. Timothy Brewer, UCLA Fielding School of Public Health professor of epidemiology and professor of medicine at UCLA’s David Geffen School of Medicine.

A paper published in the New England Journal of Medicine on April 9 examined 11 patients in Germany and Austria who developed serious blood clots after getting the AstraZeneca vaccine. Six died. It concluded that vaccination with the AstraZeneca vaccine can result in the rare development of immune thrombotic thrombocytopenia — a blood disorder where platelet clumps form in small blood vessels, leading to a low platelet count.

“When you see patients with clots in the brain, leg, lungs, you don’t expect them to have low platelets. You expect them to have high platelets,” said Dr. Akshat Jain, director of the Inherited Bleeding Disorders and Hemoglobinopathies Program at Loma Linda University School of Medicine. “Clinicians think, ‘Your platelets are low, there’s no way you can have a clot.’ “

That can lead to the wrong treatment, with deadly results.

One plausible explanation for the combination of blood clots and low blood platelets is an immune response leading to a condition similar to one seen sometimes in patients treated with heparin, a powerful blood-thinner used to prevent clots, the European Medicines Agency said on April 7. Its safety committee requested new studies and will take further action if necessary, it said.

The condition is treatable within a 24-hour window with intravenous immune globulin to quiet the immune system, Jain said. “The faster these people get IV IG, the better,” he said.

An expert panel at the U.S. Centers for Disease Control will meet Wednesday, April 14, to start weighing the evidence on the J&J vaccine. The European Medicines Agency did the same with AstraZeneca, concluding that its benefits outweigh its risks. Unusual blood clots with low platelets should be listed as a very rare side effect, it said, and by recognizing the signs and treating them early, “healthcare professionals can help those affected in their recovery and avoid complications.”

Many countries using the AstraZeneca vaccine are steering it toward older people at higher risk from COVID-19, while restricting it in younger people, who were the ones primarily affected by the rare clots.

“Clearly the understanding for this newly evolving condition is very, very limited, but what we know so far is extremely concerning,” Jain said.

Los Angeles, Orange, Riverside and San Bernardino counties have thousands of J&J doses in stock, and will leave them there until further notice from the CDC. But many expect J&J to return to the rotation.

The clinic at Alessandro High School in Hemet was scheduled to give 285 people the one-dose vaccine on Tuesday, April 13. Instead, it offered the two-shot Pfizer vaccine “so people can either choose to get that vaccine or reschedule,” said Dr. Geoffrey Leung, Riverside County public health officer. Mobile clinics will offer the option of getting another vaccine at a fixed clinic site or rescheduling, Leung said. Three mobile clinics in Hemet, Mead Valley and Lakeland Village set for Tuesday were canceled, affecting about 400 people.

“Our hope is that this pause will be on the order of days as opposed to weeks,” he said. “We apologize for the inconvenience but safety is our top priority.”

In Riverside County, more than 19,000 Johnson & Johnson doses have been administered. So far, no instances of the blood clot have been reported, officials said.

Anaheim officials tweeted Tuesday morning that those with upcoming appointments to receive a J&J shot at the Anaheim Convention Center could keep their slot, getting a first dose of Moderna instead. “You can also reschedule for J&J upon its expected return,” the tweet said.

About 35,000 Orange County residents had been given a Johnson & Johnson shot by public and private vaccinators through April 4, according to the Health Care Agency’s latest data. A majority received the one-dose vaccine at county-run sites.

In San Bernardino County, clinics that had been scheduled to administer the J&J shot switched to Pfizer, and people also will get appointments for a second dose, spokesman David Wert said. No delay in appointments or supply issues are anticipated, but the J&J was a popular choice because it requires only one dose, he said. The county has received 48,600 doses of J&J, compared to 365,625 Pfizer doses and 324,000 Moderna doses, according to county data.

In Los Angeles County, some 200,000 J&J vaccines have been administered — including into the arm of Gov. Newsom. People with appointments for J&J will be contacted to reschedule or provided a new appointment date for a Pfizer or Moderna vaccine. In Long Beach, no J&J vaccines were scheduled this week at the Long Beach Convention Center, so there won’t be much impact. People scheduled to get it at mobile clinics will be offered Pfizer or Moderna.

Pasadena public health officials say they’ll hold off distributing the 500 doses they have on hand, which were slated to be used in community clinics in an ongoing effort to vaccine hard-to-reach residents, and will use the Moderna vaccine instead. Dr. Ying-Ying Goh, the city’s public health director and medical officer, said it will slow down vaccine distribution because those residents will need two shots instead of one.

“We can only get people fully vaccinated half as fast” with Moderna, compared to the Johnson & Johnson vaccine, she said by text.

The more, the quicker, the better, officials say. We need some 80 to 85% of the population to be immunized in order to reach herd immunity, where the virus essentially fizzles out for lack of new hosts.

“People should be reassured that the FDA and the CDC are prioritizing safety and handling the situation with an abundance of caution to ensure the vaccine supply is as safe as possible,” Brewer said. “COVID-19 is a very serious disease and we have other vaccines available which do not seem to have this problem.”

“If we want to get back to normal, this is the only tool we have,” Jain said. “If you have an appointment, keep it.”