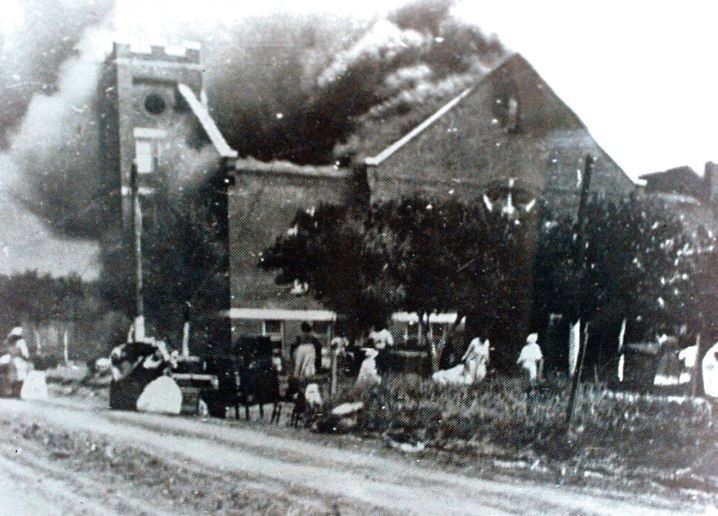 Black Americans are one of the most resilient groups of people on the earth. When one door closes, we open a window and if the window doesn’t budge, we crawl through the vent. We’ve had to claw and climb the ladder of freedom, overcoming hurdles, barriers and blockades thrown at us by those determined to “keep us in our place.” As a people, we do whatever it takes to succeed and secure a good life for our families even through the systemic racism that has oppressed us for over 400 years.

However, in 1921, a town of thriving Black-owned businesses in the Greenwood District of Tulsa, Okla. gave Blacks a taste of sweet success. One particular street in the district, Greenwood Avenue, became known as Black Wall Street and featured a variety of luxury businesses including shops, restaurants, retail stores, transportation services, movie theaters, nightclubs and more. In an article for the History Channel, Michelle Place, executive director of the Tulsa Historical Society Museum said “It is said that within Greenwood every dollar would change hands 19 times before it left the community.” Even Blacks who worked outside of the district would only spend their money at the Black-owned businesses in their community.

The Blacks in the Greenwood District were able to build a progressive community of entrepreneurs, businessmen and professionals by working together and investing in one another. They were able to create wealth and experience success together.

At the time, the State of Oklahoma was very segregated. The Greenwood District even had railroad tracks separating the Black and White communities, so Blacks were limited to where they could live and work. To make matters worse, tension was high because the Klu Klux Klan became increasingly active in the area. And, with a name like Black Wall Street in a town like that, there were sure to be consequences.

Accordng to an article by the Associated Negro Press “Retail dealers in the main section of Tulsa have long been envious of the business enterprises which the Negroes were sustaining out in their section.”

Not that they needed much reason to cause a disruption, but Whites in Tulsa used the incident between 19-year-old Dick Rowland, a Black shoe shiner and a 17-year-old White female elevator operator to wreak havoc on the Black residents in Greenwood, and especially on Black Wall Street.

We will never know the true events that happened in that elevator in the city’s Drexel building, but Whites made sure they sent a message that would be felt for generations to come.

Armed Whites out for blood

Whites from across the state of Oklahoma flooded the city of Tulsa after the news of the elevator incident sparked a statewide outrage. Around 1,500 gathered at the Tulsa courthouse, where Rowland was being held. Armed Black residents met the mob in defense of Rowland, but the two clashed, and as Blacks, who were clearly outnumbered, retreated to Greenwood, Whites followed.

They murdered, looted and set the town ablaze. The White mob descended upon the Greenwood District, murdering innocent residents and stealing from their businesses before setting them on fire. Some residents, who lived in the same building as their businesses were still inside when the fires started. The massacre was called the “Tulsa Race Riots.”

The Tulsa telephone company played a part in the Tulsa Race Massacre, according to an interview with G. A. Gregg, secretary of the Tulsa YMCA. Gregg revealed that the phone company segregated its customers and at the time of the riot, all Blacks were placed on a “party line” with each other. Because of this, when the smoke from burning Black businesses in the community filled the air, Blacks could not call to check in on their loved ones. For several days that followed, Blacks contemplated the safety of their family while scrambling to reconnect.

Blacks faced resistance when trying to rebuild. As soon as the property was burned down, Whites prevented colored people from rebuilding. They claimed that the land was now to be used for the construction of a new Union Railroad Station and for White businesses.

Photos of the massacre were distributed as postcards. In total, 35 blocks in the district were burned down to the ground. After gaining national attention, photographers from news outlets around the country rushed onto the scene. The pictures were mainly just rubble and ash.

Displaced and disregarded the bodies. To this day, the death toll of the Blacks killed has yet to be confirmed. In 1997, the City of Tulsa created a commission charged with investigating the massacre. Human remains were said to be scattered across the city in various graveyards.

Tulsa City’s current Mayor G.T. Bynum is dedicated to unmasking the truth about these horrific events. “I think that a pretty basic compact that a city makes with its citizens is: if someone murders you, we will do everything in our power to find out what happened to you and to give your family closure.”